Why we should be eating more lupin enriched foods like Skinnybik

Legumes include beans like lupins and kidney beans as well as lentils and chickpeas.

Lupin has the health edge

Lupins appear to have the “health edge” over other legumes however, because of their superior nutritional composition. They have 2-3 times more protein and fibre than other legumes and much less carbohydrate thus making them particularly useful on low carb or keto diets.1 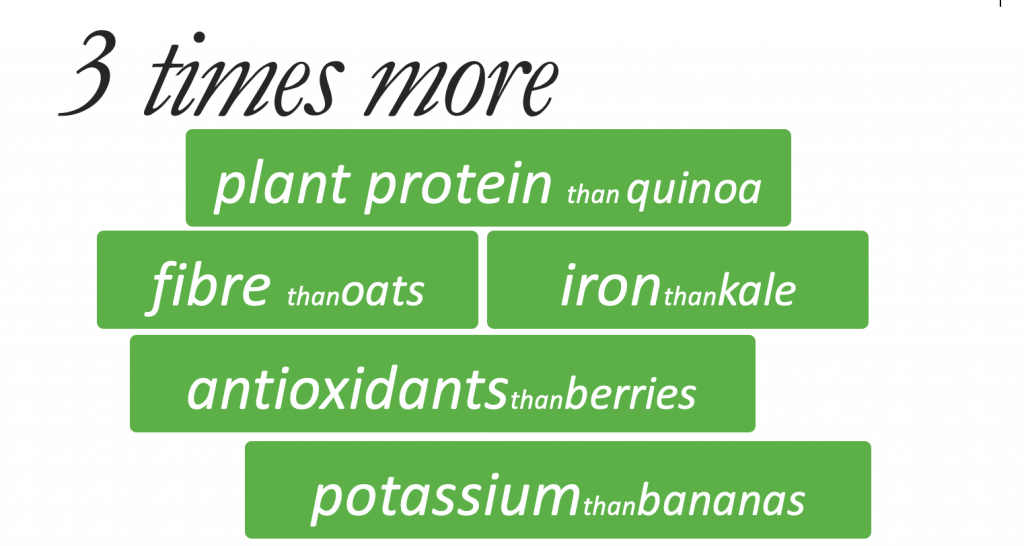 Lupin vs other legumes:

A new Systematic Review of 21 studies published in 2022 by Bryant et al2 with a total of 998 subjects, found that lupin enriched foods can be good for your health!  The review included the hospital study conducted on Skinnybik.

Findings support the inclusion of whole lupins (as flour, flakes, whole beans) in the diet which may assist in reducing risk and managing symptoms of high blood pressure, cardiovascular disease, and type 2 diabetes. Lupin extracts like lupin protein or lupin fibre were not found to be as effective.

The strongest evidence for the health benefits of lupin enriched foods (with at least 20% lupin) was in the following order:

(In 83% of studies that measured satiety, participants reported feeling full for a longer period, or ate a smaller quantity of food, after the meal or snack with lupin than with the control; weight loss that was not intentional occurred in 25% of studies).
Reduction of blood pressure

(the next most consistently improved health marker was seen in blood pressure, with 71% of studies that measured it showing significant reductions among the lupin group).

LDL cholesterol and the ratio of  LDL:HDL (less of the “bad” and more of the “good” cholesterol) (blood lipids were seen to decrease in 64% of studies)

(glycaemic control was improved in 56% of studies).
A recent Australian clinical trial on 20 hospital patients with diabetes reported that 4 lupin Skinnybik biscuits (containing 22% lupin or a total of one tablespoon lupin flour) were able to improve glycaemic control and reduce hunger compared to other biscuits that did not contain lupin.3

Specifically an increase in the beneficial gut bacteria (Bifidobacteria)

Figure: Percentage of total studies that reported differences between baseline and/or comparators (p < 0.05) by the five most investigated groups of health markers: serum lipids, glycaemic control, body weight, blood pressure and satiety, that had positive (desirable), negative (detrimental) or no effect on health outcomes.

As little as 1 tablespoon of lupin flour is needed to get these benefits. You can simply add 1 tbs lupin to your breakfast smoothie or get it by eating 4 Skinnybik (only 200 calories) for breakfast with your coffee.

Lupins have been an important component of the traditional Mediterranean diet for centuries, eaten raw as a pickled salted whole bean snack or used as flour in baked goods. They also have an interesting history, apparently being used as food in the Roman Empire to sustain soldiers during long marches!  Lupin, now grown in Australia, is a sustainable crop giving nitrogen back to the soil. Milled lupin products are easily included in your everyday diet – sweet and savoury foods.  Tasty, nutritious pantry staples include flour, flakes, crumb and semolina. 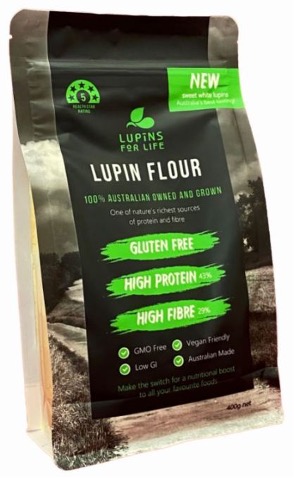 Lupin flour is particularly good in gluten free products.
Gluten free products, especially biscuits and cakes, often use high glycaemic index nutrient poor rice flour and/or tapioca or potato starch as their main ingredient making the product high in refined carbs (even if no sugar is added) and low in protein and fibre.  By using more lupin flour and less rice flour in gluten free baked goods it makes them much healthier by adding more nutrients, protein, fibre and less refined carbs (which results in a lower glycaemic index).

Even though lupins are gluten free,  they contain allergen proteins similar to peanuts and soy so should be avoided by people with peanut and soy allergies.

Lupin flour and lupin semolina is increasingly being used by the food industry in Australia  to increase the protein and lower the carbohydrate content  of bread, biscuits, cakes and pasta. I have used Lupins for Life lupin flour in my delicious Skinnybik low carb lupin biscuits.

Lupin flour does not need cooking so can be added to smoothies and yoghurt to help you feel fuller for longer, added to stews to thicken, or used as a binding agent.

Replace more than half of the wheat flour in baked goods with lupin flour to significantly reduce carb content and increase fibre and protein. It is particularly good in chapattis, sweet and savoury slices, cakes and biscuits.

About the Author: Antigone Blazos